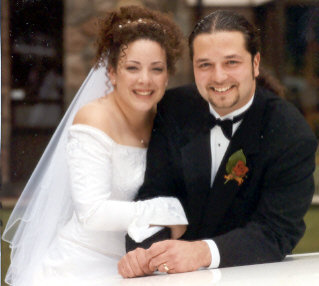 It's been a long time coming...

March 7th was when the magic happened.  Our baby was conceived.  We'll leave it at that...

I did a lot of "partying" not knowing what was taking place inside of me...just sayin':

March 10 - Luigi & Lauren's wedding.  A beautiful family celebration, and me at my lowest weight since I can remember... 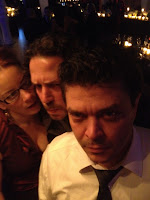 March 16 - Dinner with Athena, Barb, Susanne and Karen at my favourite restaurant...Ambiyan.  Did I mention they have my favourite drink - giant, delicious Sangrias?!  Cheers!

March 22 - My birthday dinner with 2 friends I've known the longest in this world, Diane & Susy.  It was red wine to celebrate!!  Cheers!

March 25 - Daniela's bridal shower.  Lisa and I were hitting the homemade wine.  Cheers!!

Then, on March 29th, 6 days late (after Mother Nature was due to arrive)...I decided to put my mind at ease.  I bought an ovulation/pregnancy kit.  The kit contained "many" ovulation tests and 3 pregnancy tests.  Wouldn't this come in handy?  I was in the upstairs bathroom, and Mike was in the downstairs bathroom (sorry...TMI).  I took the test.  An unfamiliar line appeared.  This line would indicate I was pregnant.  Could this be?  I ran half way down the stairs and told Mike through the bathroom door.  He told me to take another one.  So I did.  Same unfamiliar line appeared.  Yikes!  Mike was on the couch now...we just stared at each other.  He tells me I should go to the store and get a different brand...LOL, so I do.  Not only did I get a different brand, but I went digital!  This is what it said... 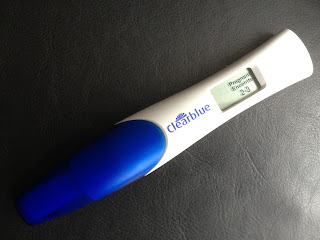 We were just stunned!  We only just started trying in January!  Could it be?  Was this real?  Was I pregnant?

We were more numb than anything else, but we decided to celebrate.  We went to my favourite restaurant (Ambiyan) for dinner.  Over dinner we just let our minds dance around what might be happening...we kept dancing...LOL.  After dinner, we hit the Markham Chapter's and bought 2 books:  What To Expect When You're Expecting and Baby Names.

The last 2 days of March were more of the same...disbelief, surreal...

On March 31st, we celebrated Earth Hour with Daniel and Jane (dinner).  Now with the possibility of a baby on the way, there was no way I could take one more sip.  I had to tell our "wine buddies" that I was abstaining from alcohol for Lent (the Catholic in me was feeling guilty inside for telling this fib).  They bought it and we enjoyed the night.

What would April bring?
Posted by Simone Reali at 8:07 PM