August started off with so much fun and excitement!  Add to that, some pitting edema.

Keswick-Fest 2012 took place from August 3rd to August 6th.  My brother (Paul), sister-in-law (Joey) and niece (Alexis) were honoured guests...here from Nova Scotia on vacation!  The last time we saw Alexis was on her 1st birthday (on the East Coast), almost a year ago to the date.  I think she enjoyed her first Keswick-Fest:  swimming, the beach, cousins, friends.  Isn't she beautiful?? 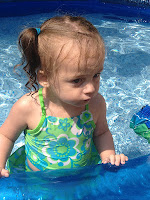 I had already been experiencing a bit of swelling, meaning my body was holding onto too much fluid, caused by the extra blood circulating in my body.  Between 50-80% of healthy pregnant women have it; hot weather making it worse.  I was willing to accept it, especially because I've really had no other pregnancy symptoms.  However, what I wasn't prepared for was my "shin indent" (also known as pitting edema).  I hadn't heard of it and when I saw how "weird" my leg looked, I freaked out a tiny bit.  If I pressed on my skin, the skin didn't spring back right away...it was like there was a hole...yikes!  I'd elevate my feet and in no time I was back to normal.  This only ever happened at Keswick-Fest and never since.  Moms, friends and professionals have told me this is also normal, but that I should mention it anyway to my OB at my next visit.  I didn't take a picture...I never wanted to see it again.

In early August, I made my first purchase of new maternity clothes from Thyme Maternity.  I bought 4 tops and 1 pair of dress pants.  It was overwhelming at first, but once a shopper, always a shopper...I fit right in!  What's with the expensive price of maternity clothes, by the way?

Also in early August, around the 10th, is when I finally started to feel the baby move.  I felt slight kicks, or jabs?  I felt them low...under my bellybutton.  I was SURE!  From then on, I continued to feel the baby move.  Sometimes everyday...and sometimes 2 or 3 days without anything.  This trend continues today.  Because of my anterior placenta, it could be dependent upon the position of the baby.

On August 13th, I was lying on the couch and felt the baby begin to jab/kick.  It was about 10:00 p.m.  I looked down at the spot on my belly and actually saw my belly "jump" with each jab/kick.  I can't explain how happy I was to see this!  I felt like I had been waiting so long!  My baby was there...I could see and I could feel.  Mike saw and felt the baby for the first time that night.  From that moment on, everytime I felt something, I could not take my eyes away from my belly.  Mike would watch for a while, then be distracted back to the newspaper, television or whatever he was doing at the time.  I kept re-directing him back to the main event.  LOL. Nothing could ever be more important now!

Paul, Joey and Alexis spent their last day in Ontario on August 12th.  The Boucheres got together at my place for a goodbye BBQ lunch and dinner.  We feasted, to say the least!  The Boucheres all predicted the date, sex and weight of Fetus-Reali (we even called Mom & Dad in Fort Erie to get their vote).  My Dad wants his baby-girl to have a big, healthy, ripe baby...LOL!! 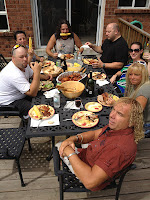 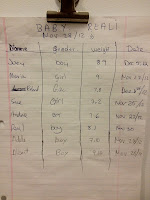 On Saturday August 18th, the Daleys came to Markham (Daryl, Nathalie, Liam, Brandon, Meagan and Zachary).  They brought us the dresser and change table for the nursery.  They even offered us Meagan's toddler bed.  How amazing is family?! 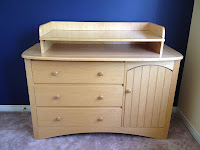 ﻿
On August 19th, we met with our Doula (Christen) at home.  She just came to check-in on us, see how we were doing/feeling and answer any questions we had.  Mike and I are both looking forward to starting HypnoBirthing classes with her in September!!

On August 20th, I had my Glucose Tolerance Test.  I've heard lots of complaints about the sweet orange liquid, but I liked it!  It tasted like the old school McDonald's orange drink.  Hoping for a pass...

On August 23rd, the first gift was shipped to us from one of our two registries.  What a gift it was!!  Fetus-Reali's first ever wheels!  Fetus-Reali has a very special CC Peter, Zia Dani and Cousin Melissa.  Thank you so much...xoxo!!!  We assembled it the very next day - Britax B-Ready 2012.  We're ready! 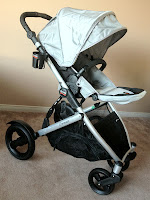 On August 26th, I hit Motherhood Maternity and purchased a maternity skirt and blouse.  I also got a free Johnson's Take Along Pack (oh, the things that excite me now...).  A member of my Facebook November 2012 Birth Club group informed us of a an App called My Baby's Beat (http://www.mybabysbeat.com/).  It works with my iPhone's mic, and headphones, and acts like a doppler.  I immediately installed and tried it, and it worked!  I instantly heard Fetus-Reali's heartbeat.  I was able to save the recording of our first listen, and would insert if here if I knew how... 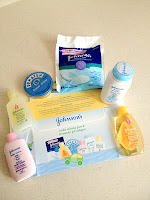 On August 27th, I'm completed the Victoria Angel Registry of Hope that will allow me to publically store my cord blood and stem cells.  I also completed my employer pregnancy/parental leave form.  ﻿It hit me just how close we're getting...  Today, I was 26 weeks and 5 days pregnant (2 days before the start of the 3rd trimester).  Here I am... 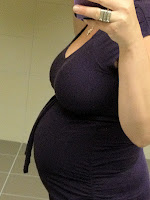 On August 28th, I had my monthly OB appointment.  I passed my Glucose Tolerance Test and was scheduled for my RHOGAM shot later in the week.  The babies heartbeat was 157, and my OB called Fetus-Reali a "trojan".  Mike really liked that, and it was the first time I felt pride for my baby-to-be!  Fetus-Reali got his/her first hug and kiss today...LOL.  A co-worker (and friend), Pat, actually hugged and kissed my belly.  It was so sweet.  I think Fetus-Reali felt the love!!  I know I did.  And more love came that evening...  The Amorosis came by for a spontaneous evening visit and brought the baby his/her first Italian outfit (the Amorosis just returned from a 3-week vacation).  How fitting is this?  Perfect for a photographer's child.  Wondering if this should be Fetus-Reali's "homecoming" outfit, and perhaps first "beautiful photo"?? 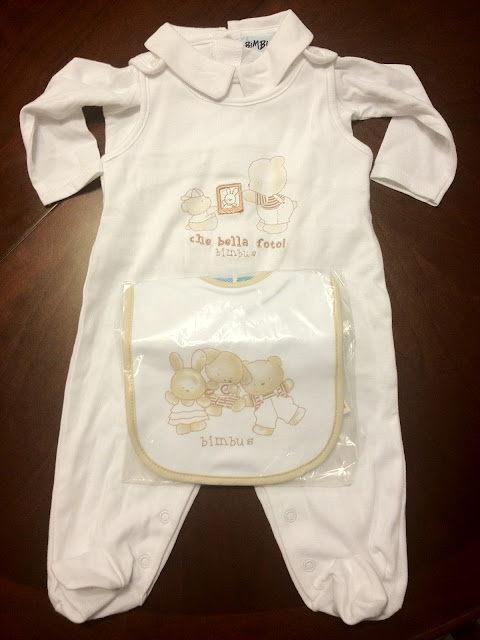 Dr. Peters' office called me over today.  Apparently, my weight in the last month spiked suddenly!  I was told to track my food and weight daily until Tuesday September 4th, which is when I would see her next.  Of course I started to worry, knowing this was to check/rule-out preeclampsia, but was hoping and praying it was due to over-eating and water retention.  My blood pressure is perfect, which is the #1 symptom of preeclampsia.

On Friday August 31st, I ended off my 6th month (and 2nd trimester) with a RHOGAM injection "where the sun don't shine".

Stay tuned for what the 3rd trimester will bring...