We have spent the last year learning to be parents, and becoming a beautiful family!  We have enjoyed every second with our baby girl and are in awe of her everyday as she grows, experiences and learns!  She is something so special that no words could ever describe...

Somewhere between August 30th and September 3rd, the magic happened!  It was a busy week...LOL.  This time was different...I knew instantly, but I can't explain how?  Bam!  Pregnant!  But,  never did I fathom...

I do know that much has changed since last time and now.  Blogging monthly??  How does a new Mom do that?  I'm back at my computer blogging, but even finding time to blog "per trimester" is proving difficult.  Gotta start somewhere, so here goes:  Double Trouble:  The 1st Trimester (August 20-November 18, 2013).

Mid-September a pregnancy test confirmed my suspicions...I was pregnant.  So, we celebrated with dinner out.  We knew we wanted to complete our family...we wanted Lorelai to have a sibling close in age, and let's face it, I wasn't getting any younger...  I wanted 1, Mike wanted 3, and we compromised on 2. 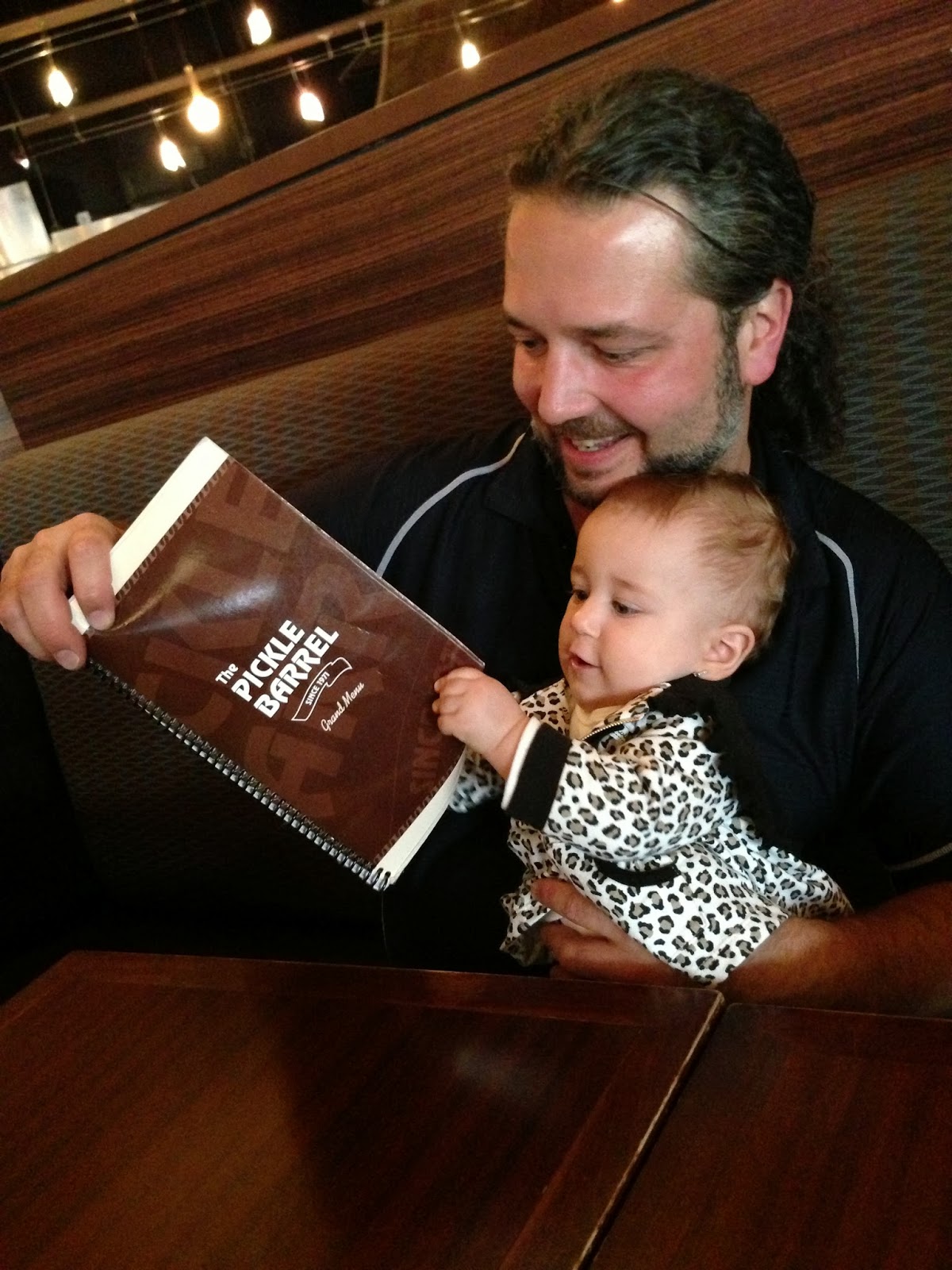 The first to know (before even confirming my pregnancy with a blood test) was my November 2012 Birth Club, the Amorosis and my management team at work.  My November 2012 Birth Club is a group of amazing women/mothers across Ontario who all came together when we were expecting our November 2012 babies.  What a network of support, and such a valuable resource...not to mention the many friendships formed!  As a first-time Mom, I was so lucky to be a part of them (and continue to be to this day).  Mrs. Amorosi had her suspicions.  I was buying the maternity clothes she was selling even before I was pregnant...LOL.  We were having a "sangria" dinner party late September...she had to know, but I think she already did!  Early October, on the same day my pregnancy was confirmed by blood test,  I told my management team at work.  I was due back from maternity leave on November 25th, and it was only fair that they could plan accordingly.  It was hard.  On the one hand, I was so happy to be expecting, but I felt guilty going back to work pregnant.  I assured them that the next time I returned, I was never leaving again!!

Thanksgiving 2013, we announced our pregnancy to our families.  As we went around the table disclosing what we were thankful for, Lorelai revealed her shirt.. 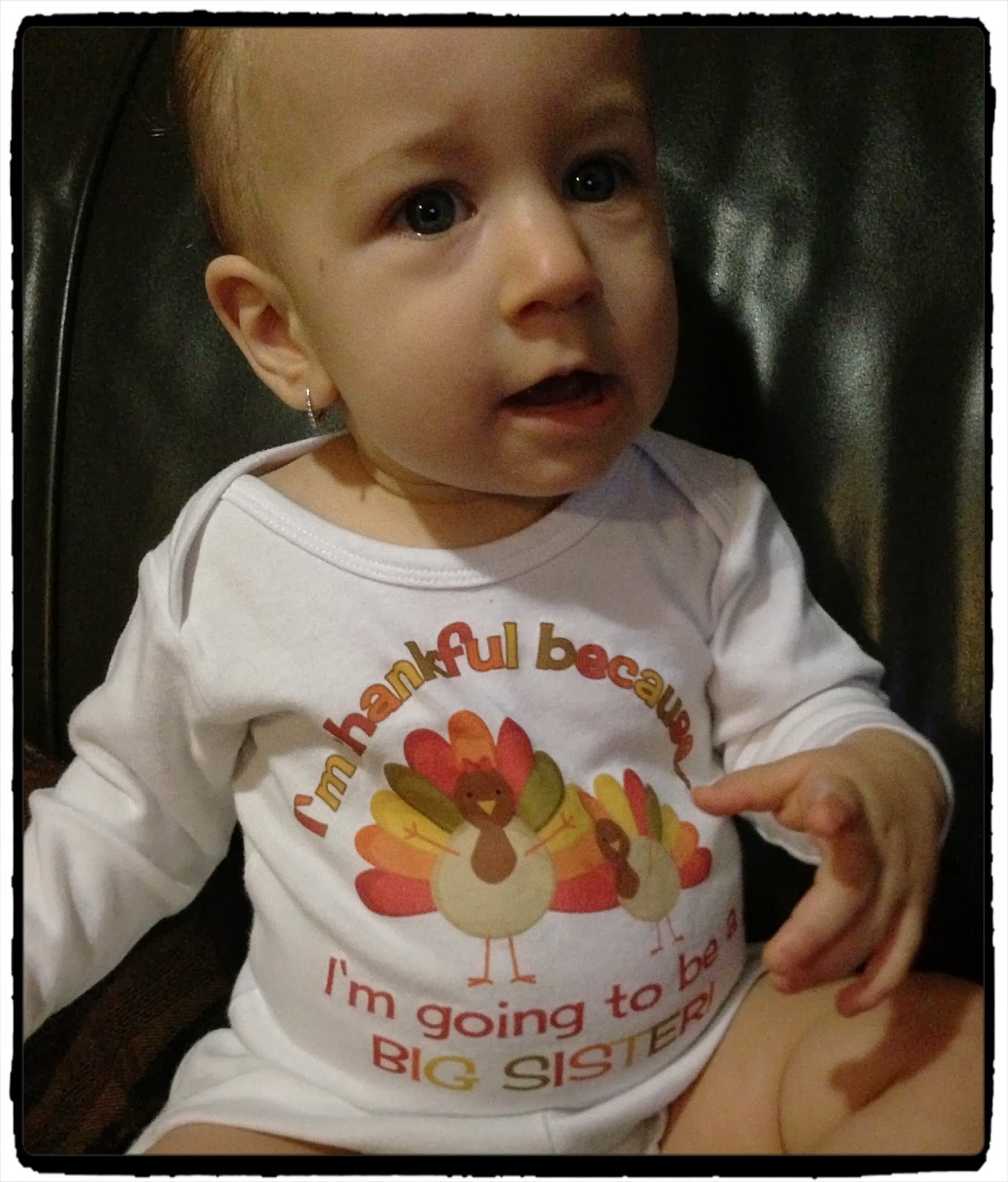 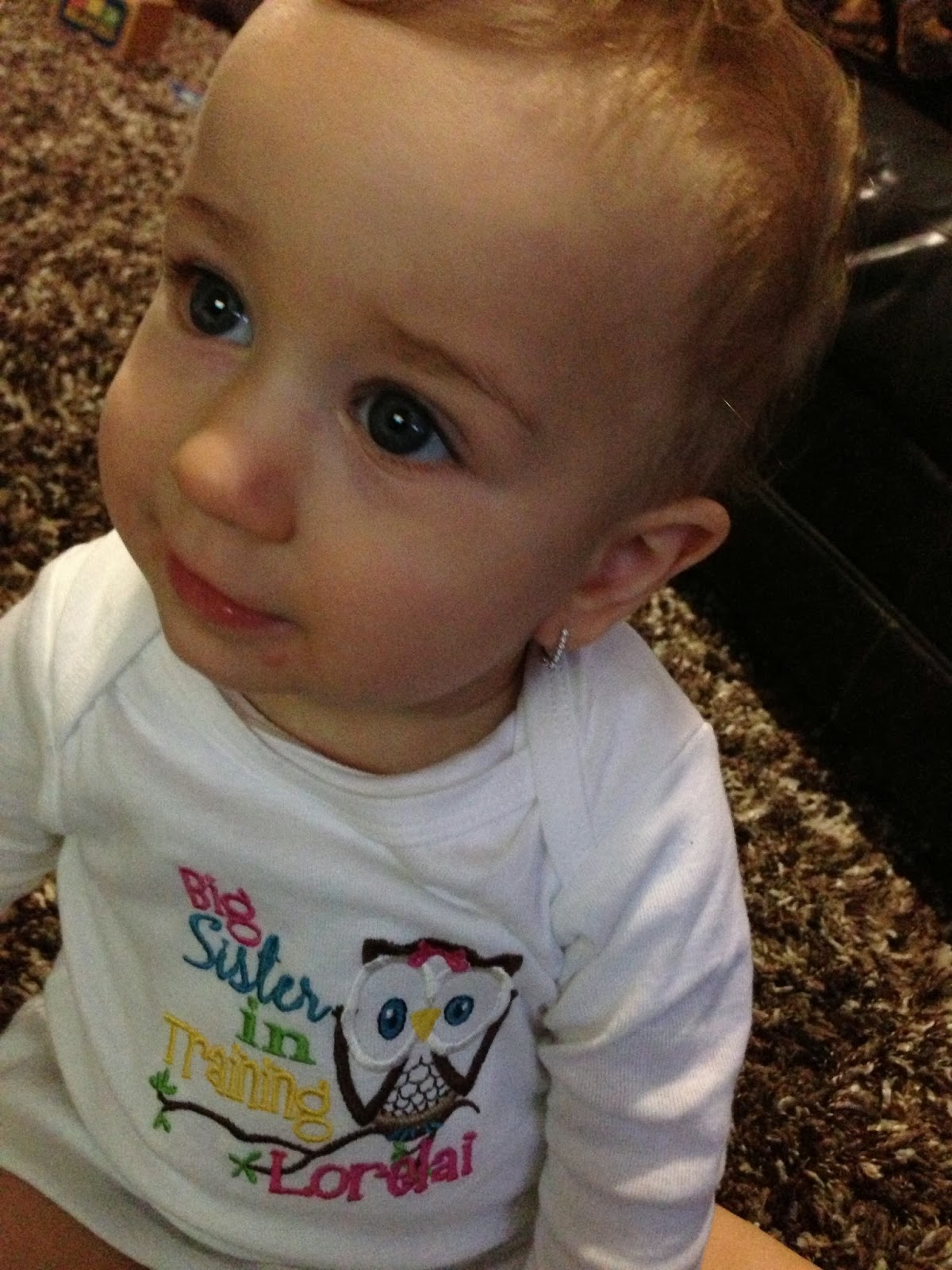 On November 5th, I was shocked to the my very core!  I was at my IPS ultrasound, and the technician asked me if I was ready for the good news.  I was confused and told her that I was already here for the good news.  She said, "it's double the good news".  I was floored...I was numb.  Mike, Lorelai and I were having twins... 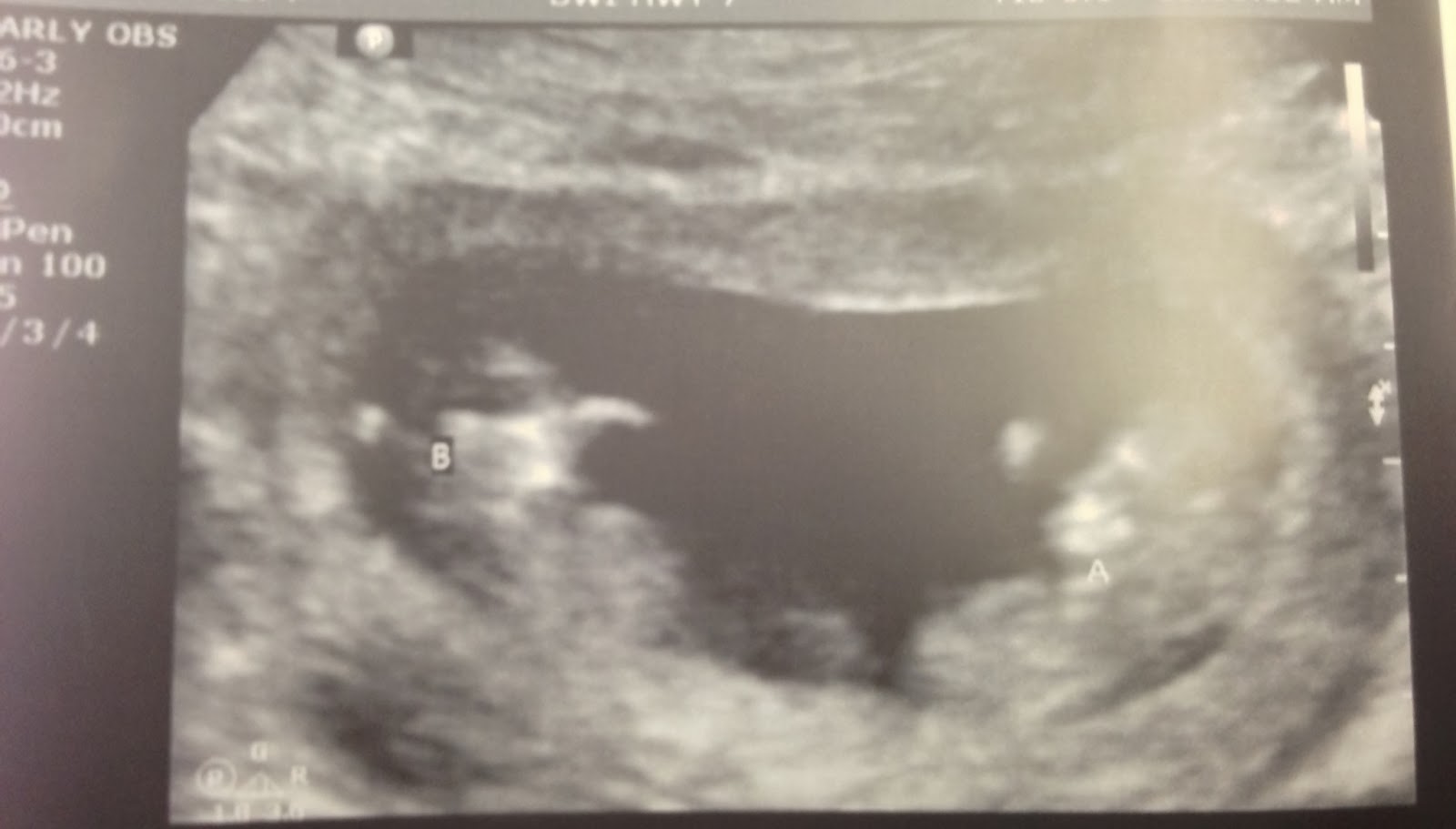 I never even imagined this possibility...it never even crossed my mind.  For the next 2-weeks, Mike and I were reeling.  It was a surreal feeling that I don't think either one of us could explain.  Was it for real? It felt other-worldly...

Then came the questions...  Could we do this?  Could we afford this?  Is our house big enough?

I will admit, I was a bit down at first.  I had this perfect little baby girl that was my whole world.  For her whole life, everything I had was hers to give.  How could I continue to love and give the same to her?  How could I love 2 more babies as much as I love my first?  How would I share myself with my husband...MY 3 KIDS, and still have time for myself?  It didn't take long for me to feel my heart open to Fetuses-Reali.  Love only gets bigger and stronger.  Love makes us better.  By adding more to my life, I was adding more to all of their lives too.  I felt my love overflow and I knew everything would be just fine!  I am blessed with abundance, and for this I am grateful.

Mid-November, a few more people needed to know (due to circumstance...usually involving alcohol)...like the Fiorindis, the Scagliones and even the Noseworthys!  I had my first OB appointment and this was REAL! 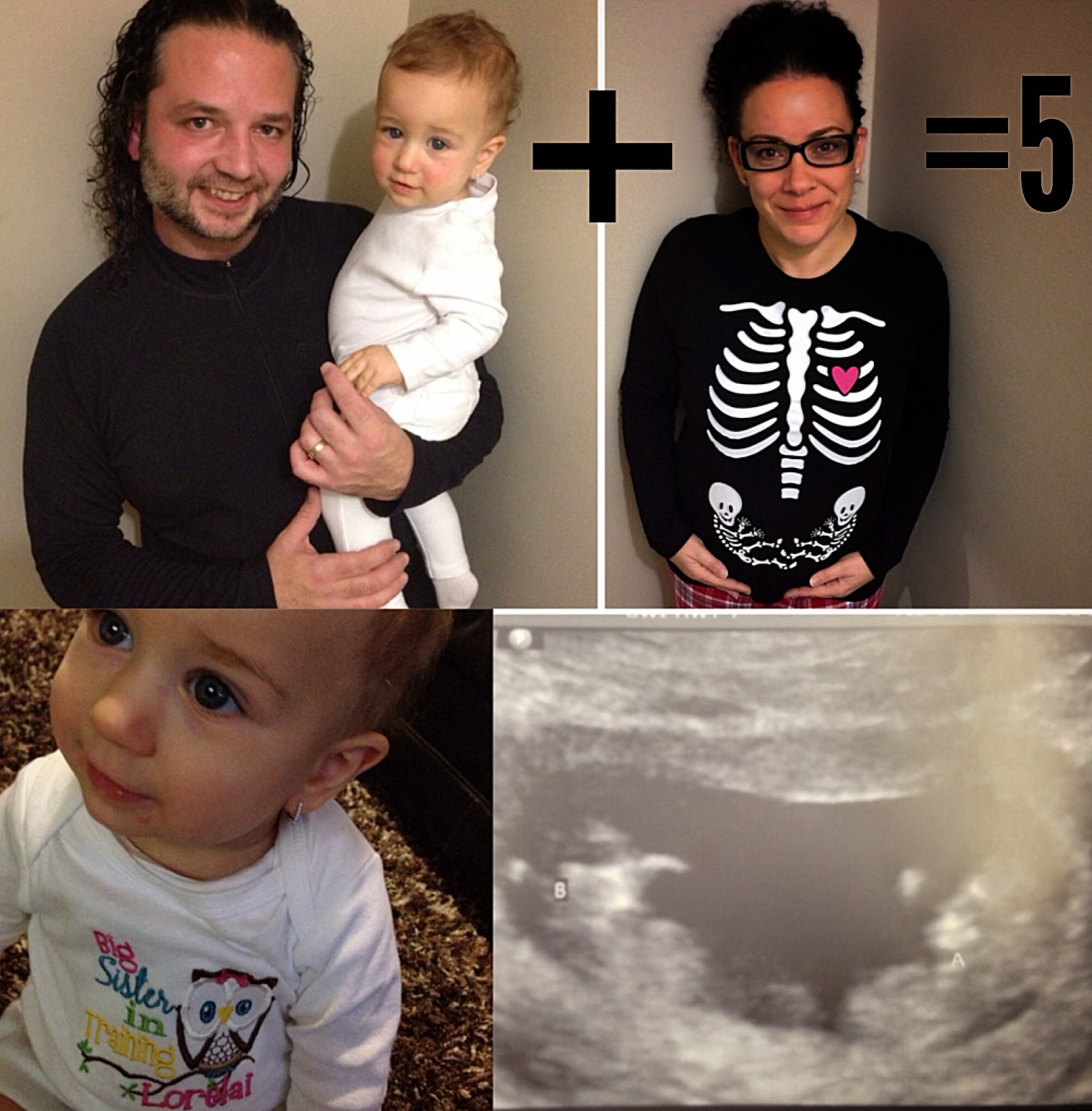 Never did I think I could shock the world again, but I did (and the world shocked me too)!

Hang on to your hats...Fetuses-Reali coming Spring 2014!